Life Membership is an honour awarded to people who have made a significant contribution to the sport as either a coach, official, administrator, or player.
The SRASA Board use the following criteria to assess if a person is eligible for Life Membership:
Life Membership will be presented periodically at the SRASA AGM.
Life members retain voting rights at the AGM and are kept abreast of major developments within the organisation to which they have the opportunity to provide opinions.
Squash SA Life Members
Len Atkins (OAM) *
John Chapman*
Malcolm Kennewell*
Harry McMaster
Metze Bradey
William Spear (OAM)
Dr Bruce Walker
Judy Feltrin
Grant Donovan
Kaye Reeves
Wayne Aspinall

Introduced in 2015 this award recognises Squash and Racquetball Players who have achieved at the local, State and National level.
Affiliated Clubs are encouraged to nominate players and past players using the Nomination Form, Nominations must be endorsed by the Club Committee
Nominations will be assessed by SRASA Board based on player highlights including:
Awards will be presented periodically at the SRASA AGM.
Player Honour Roll
Len Atkins (OAM)
Bryce Allanson
Nomination Form - Player Honour Roll

Player of the Year Awards

Player of the Year awards are given each year to the best Male and Female player (for both squash and racquetball), best State Grade player, and best Divisional player.
Awards are determined by Squash SA using statistics from Autumn and Spring Pennant.
A Junior Player of the Year is awarded to a Development Squad Player who has demonstrated the most improvement and good sportsmanship.
Squash SA Player of the Year Award Winners

The Adrian Bainbridge Memorial Award is an annual award given to the Premier League team that finishes top of the ladder at the end of the Autumn season. 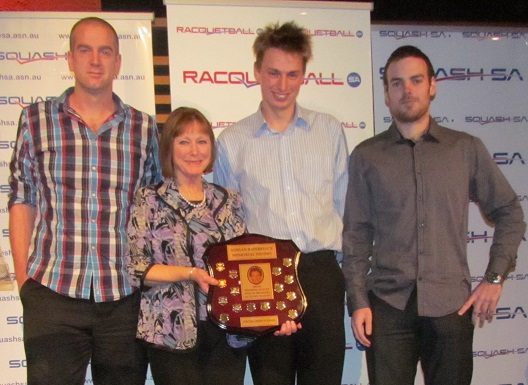